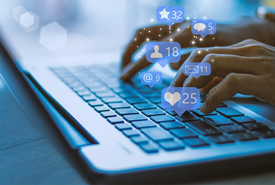 An employer engaged in unlawful surveillance in violation of the National Labor Relations Act (NLRA) by asking a worker to gather information and report back about a pro-union, private Facebook group to which other workers belonged, according to a recent decision by the National Labor Relations Board. Under the NLRA, an employer can’t “interfere with, restrain, or coerce” workers in their exercise of legally protected group activity, including going out of its way to spy on workers while they’re engaged in pro-union activities. Historically, that meant an employer couldn’t send a manager to a union hall to watch workers discuss the possibility of forming a union, because such surveillance discourages workers from engaging in their legally protected right to organize. But with the advent of the Internet and social media, the Board has expanded protections against unlawful surveillance to include technology-based methods of organizing. For example, in a 2018 decision, the Board upheld a judge’s finding that searching a worker’s Facebook page for pro-union activity was illegal surveillance and, despite being “carried out with more modern methods,” was “no different than the ‘curious’ supervisor who, upon hearing that there would be union activity at a roadside park or a local tavern, takes a ride over there to see what he or she could see.”

In this case, the employer engaged in unlawful surveillance when a manager asked a worker to report on which coworkers were members of the pro-union Facebook group and what they were posting. The worker had actually notified the manager of the existence of the group, an act that by itself didn’t violate the NLRA. But when the manager asked the worker to “report on its contents and membership,” and then “followed up…with requests for additional information on the membership of the group and its activities,” the company crossed the line into unlawful surveillance (National Captioning Institute, Inc., NLRB, Oct. 2019).

Tips: The Board has long held that employers can’t act “in a way that is out of the ordinary in order to observe union activity,” which includes searching – or encouraging other workers to search – workers’ social media pages and accounts to find union activity. The NLRA gives most non-management employees wide latitude to band together on issues related to wages, hours, and working conditions, including through the use of technology. Although the means for organizing in 2019 may be different, many of the rules are still the same. If you have questions about the NLRA, protected activities, or unions, contact your Vigilant employment attorney.

Not a Vigilant member? Learn more today about how we help employers with complex employment issues under a flat monthly fee.

On June 23, 2021, the U.S. Supreme Court helped to protect employers’ property rights by striking down a California regulation that required agricultural employers to grant…

The Washington Supreme Court recently ruled the state’s agricultural exemption from overtime doesn’t apply to dairy workers, in a case with widespread implications for all agricultural employers.…

Question: One of our employees posted an abusive and profane message about their supervisor on social media, complaining to coworkers about pay and working conditions.…

The San Francisco Board of Supervisors recently voted to create a temporary right to reemployment following a layoff resulting from the COVID-19 (coronavirus) pandemic. The “Back to…