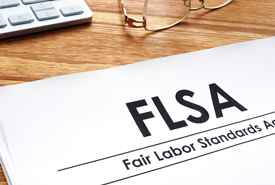 The U.S. Department of Labor (DOL) recently announced changes to the rules for determining joint employer status under the Fair Labor Standards Act (FLSA). The new rules clarify what it means to be a joint employer under the FLSA, and list many helpful examples. The rules take effect March 16, 2020.

The rules state that no one factor determines joint employer status and that maintaining employment records won’t, by itself, make a person or entity a joint employer. More important in assessing each factor will be the degree to which the other person or entity actually exercises control over the worker. However, in a policy shift, the new rules make clear that the worker’s “economic dependence” on the other person or entity isn’t relevant for determining joint employer status, and that “no factors should be used to assess economic dependence,” including many factors that courts use to determine independent contractor status. In other words, the joint employer test is now explicitly different from tests for independent contractor status.

Tips For Employers: Joint employers are both liable for wage claims under the FLSA, and these new rules will affect how courts rule on future wage claims against alleged joint employers. Review the DOL’s fact sheet on the new rules, check out our Legal Guide, Temporary Employees, and call your Vigilant Law Group employment attorney with any questions.

Need more help with this topic? Reach out today to learn more about Vigilant membership.